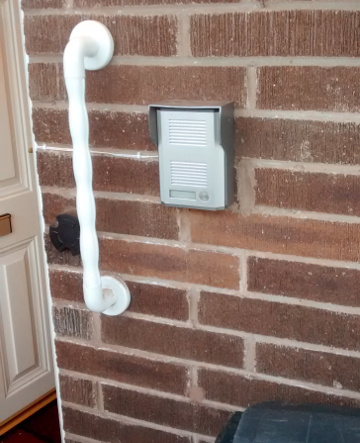 This installation job was to fit a second hand intercom unit. It was retrieved from a block of flat and was in perfect working order. The interface goes to a control box just inside the door. When the button is pressed this sends a signal to the phone. Using the same GSM technology as cordless phones, you can answer the phone and find out the identity of the caller via the interface. This will provide an additional layer of security as a home intercom allows you to communicate with strangers at the door.

I was pleased to see this item reused by someone instead of going in to the bin. It was a pretty simple to fit, however, the power point was miles away from the door. I had to extend the DC cable run off the secondary coil of the transformer. I originally advised that a wireless battery operated system would be better in this instance, as it would save all the cabling. However, the customer was not in a position to purchase extra hardware. Under the circumstances it was a simple case of running 1 Amp rated lighting flex which would be adequate for the 12V load we were powering. 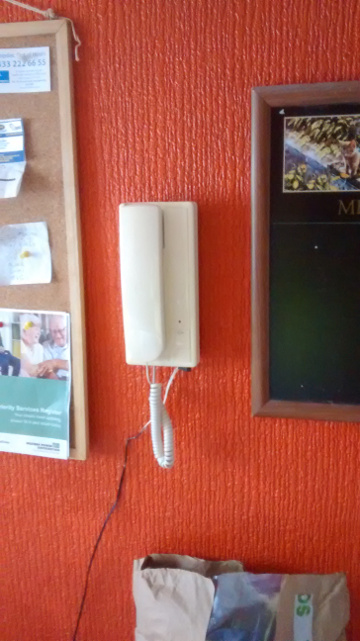 It took 7.5m of cable taking in to account running it around the door frame and along the wall under the carpet. Fortunately, I didn’t have to do any drilling and the paint work on the wall was fine. It worked straight off the bat and a home intercom is the perfect solution if you are worried about opening the door to strangers. At least you can ascertain who is calling before you even have to open the door.

I could have also picked apart the circuitry on this, for example it could have been re-purposed to control a relay instead of the phone. Home automation is pretty cool to play around with, but for now it is being put to service in the job it was designed for. This is yet another old piece of tech that has had its life extended.