This Nintendo Wii came in with a strange fault where it would not accept discs when inserted. The Nintendo Wii is a well known games console that can have up to 4 players, internet connectivity, and wireless control with a novel lance controller. If the disc managed to stay inside briefly, the mechanism would make an awful grinding sound and spit out the disc. When tilting the machine I could hear a strange rattling which led me to think the mechanism had gone faulty.

Make sure you hold tightly to the controller at all times as you may inadvertently throw it at a window!

As usual, Nintendo corporation do not like anyone taking their stuff apart. They have to make games console repair difficult! We have the usual triangle screws and lots of hidden ones. Cunningly, they hid some of them underneath the rubber feet, meaning you had the irksome chore of prizing out each rubber foot to make sure there was not a hidden screw.
Some of them were hidden under sticker covers, so in the event that you had opened up your device, Nintendo could refuse you warranty, as they could notice the marks on the sticker covers indicating tamper. Luckily my friends at ‘ifixit’ produced a teardown guide, and they had already discovered the locations of all the hidden screws. Wii teardown

It was simply a case of taking all the feet off because Nintendo changed the location of the holes depending on how old the machine was! I fix it is a valuable resource, and they have provided me no end of help to take things apart and fix them in the past. After taking the screws out, you have to remove the fascia from the CD panel. 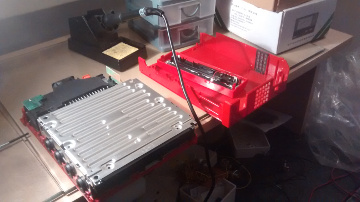 This is where it gets tricky as you have to pull the cable out of the guides and take off the connecting wire, all on a short tether. Then it is simply a case of prizing up the main cover, where you expose the machinery. There is a heat shield and sink above the disc drive which is removed with 4 screws. Looking inside the disc drive I spotted the culprit straight away. 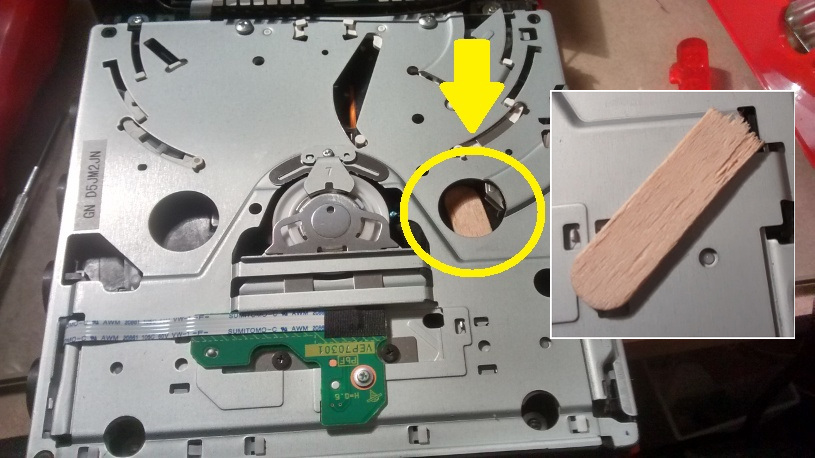 Those pesky kids had only inserted a lolly stick in to the tray DoH! It was a simple case of fishing it out with a pair of forceps and then the disc tray was free from obstruction. I turned the machine on, and it accepted the disc, no noise anymore. Reassembly was quick and easy as I didnt have to find any hidden screws. Luckily I also had the sense to lay them out in a methodical order as they were all different sizes and diameters. The feet went back on easily with an application of no nails with a cocktail stick just to bond them to the machine again. Turned it on and voila, working as good as new. Another piece of tech saved from the tip and returned to operational status.