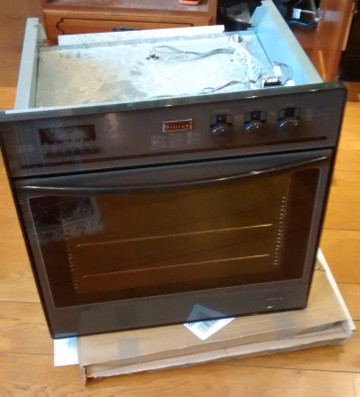 This electric cooker repair was due to nuisance tripping on the RCD, whenever it was turned on. This pointed to a short ciruit current operating. Cooker RCDs are generally rated at 47 Amps, in order to trip the RCD it requires quite a current surge.
Upon investigation the RCD had an earth trip mechanism. Since the cooker had been moved on to another RCD circuit, and was working fine on that before I arrived, it was clear that an earthing fault had developed. The good news was that this meant the RCD was working correctly as a safety device and the electrics were operating normally.

In order to find the earth fault, this meant I was looking for some point at which the operating current was leaking to earth, forming a short circuit path. With any device that produces heat electrically, the first thing to do is inspect the heating element.
Heating elements tend to break down over time due to the constant actions of heating and cooling. This process can take many years but once the element begins to degrade it can cause the high current flowing through it to arc. As the chassis is metal the current can arc across, and since the chassis is directly connected to earth, this is where the current flows. In layman’s terms this is what we mean by earth leakage when we are talking about heating elements.

Heating elements tend to break down over time due to the constant actions of heating and cooling. 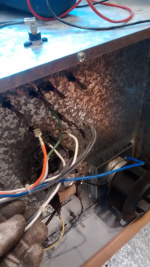 Any metallic appliance with 230V running through it must be earthed. The earthing system means that the chassis is connected to earth. In the event that the chassis becomes live through a fault, the electric flows to earth instead of through the operator. In an ideal world the earth is completely isolated from the neutral and live conductors. If at any point there is any current flow to the earth conductor, this can be measured using an insulation resistance tester.
In essence, we want to measure the leakage current and thus determine the resistance of the insulation properties of the whole circuit. To do this we pump a high voltage pulse through each conductor and see what we measure on the earth.

In order to pass a PAT test, the insulation resistance between any part of the machine an operator can touch and a live conductor touch has to be greater than 2M (2 Mega ohms = 2 million ohms). If it falls below this limit the machine is deemed to fail the PAT test. Whilst others may place this limit at 1M, generally the safety of the device is clearly deteriorating once it gets lower than 2M.
You should always ask your PAT tester about safety margins and how they deem something as safe. It is not just a case of something meeting the limits, it must be in the context of how the machine is expected to perform in normal operating conditions.

Here on initial testing we can clearly see that we are measuring a problem since we are getting this lower 0.93 M on the earth.
In order for the device to be safe we wanted 2M which demonstrates clearly that we have a problem.
Now we disconnect the elements and we see that as we disconnect them individually, the insulation resistance increases.
This demonstrates that the elements are causing the earth leakage. With just the one element plugged in we read a healthy 105M meaning that this one doe not need replacing just yet.
However, I had to decommission the machine and remove it from use as it was clearly unsafe.

It was at this stage where I discovered that the cooker was actually twenty years old. Having done all this work I did not think we were going to have any luck finding parts. To my surprise Stoves actually made their elements backwards compatible and this bucks the trend we are seeing with a lot of other manufacturers.
Credit to Stoves, they make well engineered products and to be able to find a part from a legacy machine is impeccable and demonstrates that they are not driven by the toxic greed culture that other manufacturers exhibit. I hope Stoves continue to support their older devices in this manner and lead as an example of providing products built to last and excellent customer support. 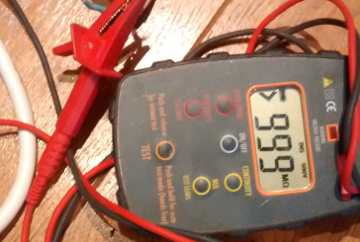 Once received, it was simply a case of installing the new elements and then performing an insulation check on the new ones to ensure they were sound. Voila, now we are reading >999M indicating a very high degree of isolation between live conductors and earth.
This 20 year old cooker is fit for active duty once again, and it certainly pays to buy from a brand like Stoves, unless you want to be buying a new appliance every few years. It is a real shame that the current crop of appliances from most major manufacturers are built so poorly and cheaply. It was a pleasure for me to do this vintage electric cooker repair and it just goes to prove that they don’t make em like they used to! 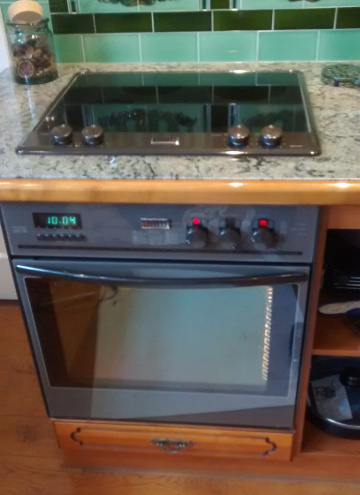 You should always ask your PAT tester about safety margins and how they deem something as safe. It is not just a case of something meeting the limits, it must be in the context of how the machine is expected to perform in normal operating conditions.