This Sony amplifier repair was down to a distortion fault on the left channel. The bass end was distorting slightly during testing.
When turning the volume control there was an obvious wobble on the volume pot and a lot of audible crackle when turned.
I opened it up, and took the face plate off and discovered that the nut around the potentiometer had worked loose after years of use, causing the wobble.
It would be a simple case of nipping up the mounting bolt on reassembly to solve this. 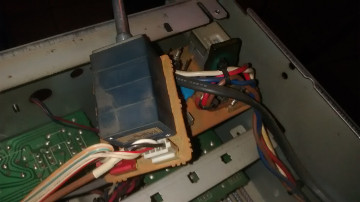 After that the volume board came out and it was a simple matter of disconnecting the ribbon cables.
The volume pot is an ALPS Blue RK27114 Quad gang potentiometer (10K).
It turns out that these pots are some of the finest made by ALPS.
I managed to source one and when it arrived, to my horror, I realised it was missing a fourth pin on the first wiper.
Looking at the schematic, the way the pot is configured seemed to give a separate output to both the headphone and main amplifier section. In this sense it appeared that only the one would work initially, however, the schematic was a scanned photocopy which was blurred, it was difficult to see what was going on.

I tried to source another but this 4 pin version was not available and I had to settle for this 3 pin version and make it work.
This left me with a dilemma on this amplifier repair; either I had the headphone section or main amplifier working. If I had tried to wire both sections in parallel, I would be dividing the operating current.
This might prove problematic, in that the related circuitry would not be at the correct operating point. So, I decided that I would have to live without the headphone socket.

Amplifier Repair – How To Fix A Delaminated Trace

This can often mean game over for electronic repairs, especially when it is a multilayer PCB.
However, as this was a single layer circuit board it was going to be relatively straightforward to get around this problem, all that is needed is a jumper between the break in the trace.

The procedure for this is as follows:

Firstly find a good spot and scratch off the solder mask to expose the copper. 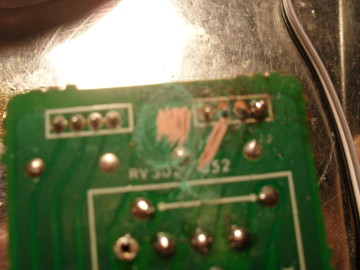 Clean the area with solvent and make sure any debris is removed.
Flux the exposed section of the copper and tin it with solder.
Flux the trace again and then run a jumper wire across. I find it easier to run the tip of the cable from your point of origin and trap it on the tinned section of trace.

Then your cable is in place to solder. Then you can just trim off the excess.
Make sure you use solid core cable for this, DO NOT use multi-strand cable.
It can be worthwhile using adhesive to hold a component down if the board is in a bad way, however, it wasn’t required in this instance as the other lugs locked it in place. 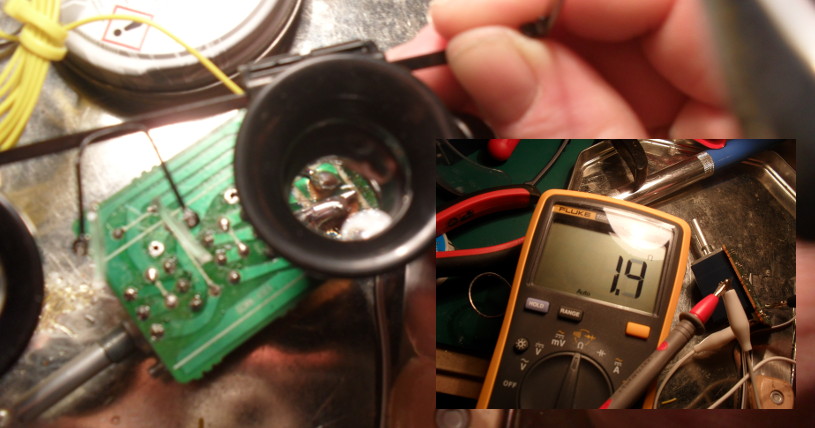 In this case my solder job looked doggedly rough as I didn’t flux the component leg, however, on testing with a multi-meter it wasn’t bridged. So I decided to roll with it anyway. It is always worth continuity checking your repair work to ensure everything is as it should be. The last thing you want to do is reassemble with a problem still there. In this case I recorded 1.4 ohms which is about the resistance of my test leads. This meant there was no resistance across the repair and all was as it should be.

After deciding to lose the headphone port, I wired the board back in and went for testing. I was pleasantly surprised when the headphone port worked as well. So so much for my interpretation of the blurry schematic! It was virtually impossible to read and as the amplifier was so old, it was not going to be possible to ever get one.

The balance control was crackly too but it was only a cheaper stereo pot. A squeeze of deoxit fader cleaner worked in to the knurl of the shaft soon cleaned that up. The unit was ready for testing. These amps were never renown for being the best sounding in the world, but they are rugged, well built, and the sound is pretty clean. I am not usually a fan of Sony gear (over priced and over hyped IMO) but this one sounds very good to my ears. It sounds particularly good with vinyl playing through it. Through a decent pair of Mordaunt Short’s the stereo separation of the sound field is fantastic and I sat and enjoyed listening to and old copy of Underworld live at Glastonbury on them!

One thought on “Sony Amplifier Repair”